How Big Do Pomskies Get? 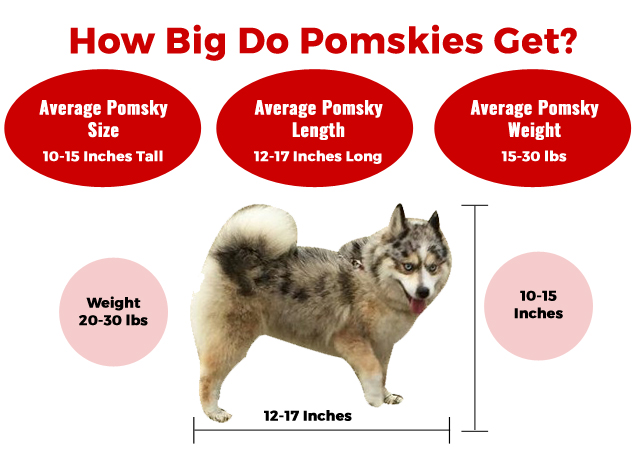 How Big Do Pomskies Get?

A toy dog breed and a sled-dog hybrid? A decade ago, this would have been unimaginable.

But with dog breeders capitalizing on the lucrative opportunity in growing a new designer breed, they have found a way to mix a male Pomeranian and a female Siberian Husky.

Shocking? Yes, sure. But adorable and swoon-worthy? Absolutely.

You’ve probably gone through hundreds of pages on Google to convince yourself that Pomskies are real. That your growing fixation on designer dog breeds isn’t tricking your eyes to see what you want to manifest.

But let us tell you this: Pomskies are real and you can buy one!

Sometimes they are just too fluffy and majestic of a dog for your own good. It’s addictive!

Who wouldn’t to be honest? Look at that:

So, you wonder how big does a Pomsky get given the fact that they come from the specimen samples of a Sibe mother and a Pom father?

It’s a mystery. From the time they were born, the guessing game about their markings, size (weight and height) and temperaments begins. Even dog breeders don’t have a way of telling you for certain.

This is why not all Pomskies that you see on the Internet are Pomskies, especially the puppy pics! Other dog breeds that look similar to a Pomsky puppy can include but not limited to the following:

A full grown Pomsky will look different from what they looked like in their puppy stage, busting so many existing myths about Pomsky size and appearance. Which leads us to…

Sorry to burst your bubble but just because a Pomsky has a Pomeranian bloodline doesn’t mean it can be bred into a teacup size.

For the dog breeding industry, Teacup Poms are not an official dog breed. They are a product of two smaller than average (male x female) Pomeranians that are likely to carry health issues you would want to get away from because of the expected vet bills.

Plus, there’s no way a Pomsky would grow that small because remember, the other half of its parentage is a freaking Siberian Husky that can grow up to 22 inches tall.

Pomskies can’t be a Miniature Husky 2.0 either

All dog breeds are unique in their own right just as much a Pomsky can grow to a limited size that’s unique to this breed.

Some say that if you want a Siberian Husky but smaller in size, get a Pomsky. This somehow makes sense but since there’s no way to tell how big a Pomsky pup will get at maturity, you have to ask yourself; what size do I exactly seek?

How big does a pomsky get?

That you have an idea about the average size of an adult Pomsky, let’s dive deeper into this matter.

A Pomsky’s size may vary depending on which aspects of its parents’ genetic qualities will be dominant upon reaching the adult age. So, they can be just about the right size, too small or too large for your own preference.

Size of the parents

Since the size of a Pomsky will depend a lot on the size of its Pom father and Sibe Mother, you can basically make an assumption based on the parents’ size.

On average, a Siberian Husky can grow 20 to 24 inches at the shoulder (from the ground to the shoulder blade) while a full grown Pom can stand 7 to 12 inches tall. Know that there are cases where a female Sibe can be smaller than expected at maturity or vice versa.

So, if it happens that a Pomsky’s Pom father and Sibe mother are both smallish than standard sizes, expect to see a smallish offspring. The same thing can be said if the parents are quite larger than average.

Similar to producing teacup-sized puppies, breeding a Pomsky using a smaller-than-usual pair of Pomeranian father and Sibe mother should set off your alarm bell. It is just unethical to breed two sickly dog-parents for the sake of cashing in thousands of dollars.

Therefore, be careful when you’re dealing with a Pomsky breeder. Some don’t always have the best intentions and may even scam you, so contact Pomsky Owners Association, Pomsky Club or America or the International Pomsky Association to get a list of reputable breeders.

Read up scam stories out there to observe the red flags. One particular story is that of Debbie who got scammed by a fraudster. She was too excited about owning a Pomsky that looking at one cutesy picture plus a very tag price (around $600), she’s sold already.

The deal didn’t end well for Debbie and she lost $800. The red flags have all been there from the start but she was just too eager to take the puppy home ASAP. One, Pomsky puppies cost anywhere between $1000 to $5000 in the US, and two, a reputable breeder wouldn’t let their puppies go to its new owners without meeting them in person.

Inform yourself about the best dog breeding practices in the industry so you can ask the right questions. It is also your responsibility to meet up with the dog breeder to check out the puppy’s parents and ask for vet records.

Dreaming of owning a Pomsky is just a motivation. It’ll take a lot of patience, time and effort to complete the all-important steps which can include evaluating your readiness and investigating the facts and offers being presented to you.